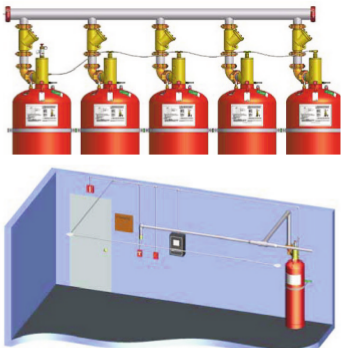 A BRIEF OVERVIEW OF SV, MV AND LV SYSTEMS

The SV (small volume), MV (medium volume) and LV (large volume) series' of Novec-1230 fire suppression systems refer to the volume contained, and some variations in the components included, valve widths and the number of cylinders involved. Choosing the right series for the area you need to protect is important for effective fire suppression. The SV series supports 3 cylinders with sizes ranging from 40-130lb, with a 1 1/4 inch discharge outlet and a 3/8 inch pilot actuation part. Like the MV series, the SV series has a rupture disc that bursts between 850 psi (58.6 bar) and 1000 psi (68.9 bar)

NOVEC 1230 CLEAN AGENT FIRE PROTECTION SYSTEMS Novec 12030 fluid is a clear, colorless and low odor liquid perfectly suited to protect high value assets in areas that may be normally occupied, in locations where clean-up of other agents is problematic, when storage space for a fire suppression agent is restricted, or when an electrically non-conductive agent is required. Each system consists of the foll owing components and their associated accessories:

Herbert Williams Fire Equipment Ltd.
Herbert Williams has been supplying our corporation with fire supression equipment for over 10 years. We are very pleased with product quality and the knowledge and level of service is second to none.
Mark Westin
Our company selected Herbert Williams for their rock solid reputation and knowledge. Bernie was a true pleasure to work with. I would not hesitate to recommend them to any purchasing manager looking for a reliable fire extinguisher, sprinkler systems & fire alarm contractor.
Francis Black
We can always rely on Herbert Williams for all of our safety storage requirements. This company stands behind its products and Rob is always more than accomadating, especially when a deadline is at stake. Great people to do business with.
Thomas Schwartz